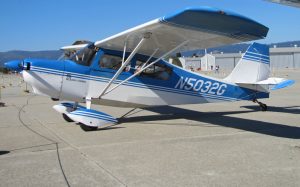 Joe was my instructor and he was merciless.  On my second lesson Joe commanded that I keep my feet on the rudder pedals and keep the plane going straight as we took off; it was horrifying. At first, it was benign and we went straight; but Joe raised the tail quickly; we surged to the left.  The grass raced at us from the left of the runway and I responded with too much right rudder; then the grass raced up from the right.  Joe mercifully lifted us off at this point but the damage was done; I was a basket case and couldn’t tell you what we did for the rest of that lesson.  A few weeks later, Joe felt that I did not fully appreciate the capabilities of this fully aerobatic 115 horsepower rocket ship; so he climbed a few thousand feet and demonstrated a three turn spin; I had a headache for the rest of the day.

I learned a lot in 32G including a healthy respect for the wind.  Or you might say that I had the crap scared out of me.  I started my lessons in March and it took almost a year before I finally got my license.  During that first year somehow I managed to schedule all of my lessons on days when there was no wind; that was terribly unfortunate.  Shortly after I was licensed I awoke one day to severe clear weather in the San Francisco bay area, visibility was unlimited.  It was a great day for flying; the fact that the wind was blowing 25 gusting to 35, albeit it straight down the runway, didn’t seem to matter one iota.  Something was different from the moment I took off; the plane seemed to climb much steeper; it didn’t feel right.  And there were the bumps-lots of bumps.  But that was only the beginning.  As I paralleled  a ridge line,  I ran into severe turbulence; the right wing pitched up 60 degrees knocking the stick from my hand.  After quickly recovering my few remaining wits, I retreated to the airport and managed to get the plane back on the ground on the second try. That episode instilled such fear that I would not fly in wind exceeding 10 knots; and, if I hit bumps, I froze, even when I was a passenger on a commercial airliner; it took nineteen years for me to shake it off.

But I learned a lot.  Today, I cannot believe that I did my mandatory cross country flights using only a sectional, an E6B, a watch and the compass. The VOR in 32G didn’t even work; well it did work a little but the To-From flag was broken; it was only useful if you already knew where you were located. But eventually I had finished all the required training and passed the private pilot check ride; I was a newly minted pilot and the Citabria was my magic carpet to adventure.