The year 2006 was a turning point for me as I embarked on my first attempt at retirement. After several months of soul searching I came to the almost sudden realization that for years I had dreamed of owning my own plane; and, in one fell swoop, all of a sudden I was there. But, I hadn’t flown in 13 or so years and I knew I would be rusty. There was, however, no doubt about what kind of plane I would be looking for—a Pitts.

After several phone calls to all sorts of people to discuss countless issues involving owning a Pitts, I finally decided to find somewhere where I could get some dual to really decide if this was a goal worth pursuing. Several people referred me to a guy named Ken Erickson, who flew out of King City, California.  My son was attending Cal Poly at San Luis Obispo about 60 miles south of King City, this would be the perfect opportunity to go visit my son and also get in some time in a Pitts.  After finally hooking up via telephone with Ken, the date was set.

Ken is the Chief Pilot for the Tutima Acadamy of Aviation Safety and here is the place to go if you want some quality instruction in a Pitts. Over the course of two days, I believe I made four flights with Ken; I didn’t bother to enter the details in my logbook because my primary mission was to determine if I was up to actually going through with this plan.  But little did I realize just how much that I had forgotten–I don’t know if I would have killed myself if I had been allowed to  take the plane out solo, but at a minimum substantial damage to the plane would have been a safe bet.  Everything in the cockpit looked vaguely familiar but not familiar enough so that I knew what needed to be done with any of it when it was required.  And my landings and take offs had suffered the most.  On one occasion while flying downwind in the pattern,  Ken casually remarked: “Well, this should certainly be interesting”.  When I asked what he meant, Ken responded: “Take a look at your altimeter”, and upon doing so I realized that I had descended 500 feet without knowing it and we were at 500 feet AGL.  I was way behind the plane but somehow I managed to eek out a landing.  My two days of flying with Ken had not worked out the way I had imagined, but I was still bound and determined to see this through.

I started a serious search for a plane to buy.  The internet had not brought us Barnstormers.com so the hard copy of Trade-A-Plane was still the only way to go and I poured over it endlessly until I finally found what looked like a good deal; by that I mean it looked like it was in great shape, needed no work and I could afford it.  N24MC, an S2A, sported a recently remanufactured engine with only 69 hours on it and fabric and paint that, although it was not “new”, was in fabulous shape…….or at least that is what I was told by the owner, Gary Cebrian.  And, most important, it looked really good and it could be all mine. 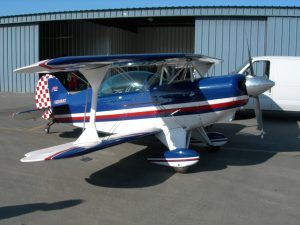 But I am the eternal skeptic; how does someone who has never bought a plane get over the hurdle of not being sure?  I decided to call Ken Erickson and ask his opinion; his response was immediate and without hesitation:  “You won’t find a nicer one; everything has been done to it”.  The funds transferred and the deal was closed shortly thereafter.  Only problem was that although I had paid for the plane, I wasn’t up to flying it and the plane stayed with Gary until Gary had the time to fly it up to Red Bluff where I had located hangar space.

The day came, 24MC was delivered, there was hand shaking all around and then it was over.  I was at long last a plane owner; it was parked neatly in the hanger; and, I knew that I was not up to flying it but that didn’t matter because 24MC was now mine. 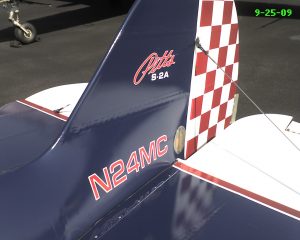