Circa 2006.  So now I owned an airplane but knew that I wasn’t ready to fly it.  So I would go to the hangar and sit in it and make airplane noises.  (I stole that line from Sean Worthington….sorry, Sean)

Once again I contacted Ken Erickson to see if he could arrange a thorough checkout.  Ken was too busy, so he contacted Wayne Handley; Wayne was too busy so he contacted John King from the San Francisco bay area and John agreed to help.  Now mind you, I barely was even acquainted with Ken and had never met the other two guys and yet they were willing to go out of their way to help.  I was amazed.  Wayne even went so far as to phone me to follow up to make sure that everything was taken care of.  Let me repeat that:  He phoned me to follow up.  Who the hell phones people to follow up anymore?  I guess I spent too many years in retail and was really  jaded. 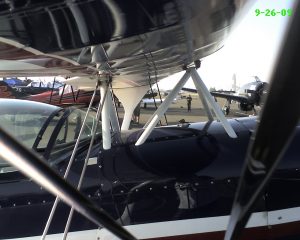 The day came and John King arrived at the Red Bluff airport to begin the checkout:  he was driving a twin Cessna.  The meager amount of money that John was going to charge me wouldn’t make a dent in the cost of the fuel he would be burning to go back and forth to Red Bluff.

The first day got off to a very slow start; in fact, it never got started:  John was not comfortable with the way the canopy lock was working and wanted me to find a mechanic who could adjust it.  That was it.  John got back in the C310 and left.  End of Day 1.

After finding a local mechanic to make the requested adjustments, Day 2 arrived and I waited for the C310 to arrive; it didn’t.  Instead, a small black and white biplane approached the field:  it sounded like a P-51 making a high speed pass.  I had never heard a plane this loud.  I learned later that the plane was called the Phoenix, an experimental amateur built homebuilt that John used in aerobatic competitions at the unlimited level.  But I am getting ahead of myself.

The checkout began in earnest, complete with parachutes.  In my mind I knew that I had 14 hours in a Pitts from back in Texas; I even soloed in it.  But my mind had forgotten all of the subtle technique; the hands and feet didn’t know what to do.  The runway at Red Bluff, KRBL, is an ample 100 feet wide and my take offs used most of the width of the runway; surprisingly my landings, if you could call them that, were not quite so out of control.  I was over-controlling the plane and didn’t realize it.  Day 1 and Day 2 were not very pretty.

Sometime along about Day 3 I said to myself before John arrived: “I don’t know what I am doing wrong on these take-offs, but on the next one I am not going to touch the rudder pedals until I see the nose start to move.”  When John arrived and we started out, I tried out my idea; it worked and from that point forward the check out went smoothly.  John would not sign me off on a BFR in a Pitts unless I demonstrated some spin recoveries.  So we did some spins.  And then we did some loops and rolls, etc.  And I was on my way.

Because of John’s schedule or the uncertainties of the weather, the entire checkout process actually took a few months.  While I was cooling my heels between actual flying days, I spent a lot of time on the internet reading about flying.  I discovered an article written by the man, Dan Rihn, who had designed the Phoenix, the plane that John owned.  I was amazed that Dan Rihn, starting when he was in college or a few years thereafter, was designing planes; and, he designed not one, but several world class planes:  the Phoenix, the Sunbird, the Goshawk, Awesome Lady and the One Design.  Over the years, if I’ve read the article once, then I’ve read it fifty times.  Little did I know and I never could have predicted that my life would cross paths with Dan Rihn ten years later.  You can find the article here; its a great read. 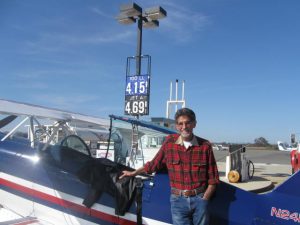