I feel like I cut my teeth in 24MC.  We flew together for 5 years.  But at first I was like a newly minted student pilot, since after all, it had been almost 20 years since I had gotten my license.  N24MC sported an advanced avionics suite:  a Garmin GPS Pilot III consisting only of an arrow that indicated the direction to your intended destination, similar to an ADF, if any of you remember those.  But to me, the Garmin was a Godsend, I was amazed at it’s accuracy.

I knew that I needed to practice so I decided to replicate my student pilot training.  Of course I started with a lot of time in the pattern getting more comfortable with landings.  And I laboriously planned cross country flights, some of which were ridiculously short in terms of time and distance.  One of my biggest concerns was fuel:  I had no faith in the fuel gauge and it took a while to get comfortable with the fuel burn per hour.  And, believe it or not, initially I didn’t trust the GPS:  I actually plotted courses out on a sectional and monitored, or tried to monitor, my progress using the sectional during the flight. N24MC was not rigged perfectly, or the trim was not adjusted quite right, so as soon as I would let go of the stick, the plane entered a descending right hand spiral turn; trying to turn the sectional over to follow the course required a fair amount of altitude.

One of my first cross country flights took me to Sacramento–KSAC.  The flight itself was uneventful; refueling was not.  I wasn’t accustomed to using the standard aviation gas nozzle and its large hose; the fuel pump at KRBL was similar to the old style automotive pumps.  For some reason when I got the hose to the plane at KSAC, there was no gas coming out of the nozzle, or I should say, it just trickled out. Of course I kept squeezing the handle trying to make it work, but that did no good.  It was only when I turn around that I could see that a kink in the hose was the likely culprit.  Not wanting to set the nozzle on the ground, I carried it back and started to fix the kink.  The gas gushed out the nozzle:  the valve was stuck wide open.  By the time I got the nozzle shut off, I was standing in a ten foot wide puddle of 100LL, my clothes were soaked, my eyes stung and I could taste the gas.   The best part:  nobody was around to see it.  The worst part:  I still hadn’t gotten any gas in the plane. 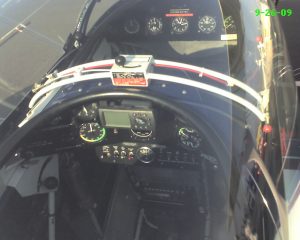 And then there was a trip to Hayward; I was enjoying the sights in the San Francisco bay area so much that I managed to bust the TCA.  I had to phone the tower when I landed and fortunately the controller didn’t make a stink about it.  Nobody would have known who I was if I hadn’t called in to land.

But one thing that I still had yet to overcome was my aversion to turbulence: I still avoided flying when the wind was anything less than “perfect”, which defies definition, and would quickly return to the airport at the first sign of bumps.  But gradually, I came to grips with this fear.  The first turning point came when I was due for my next BFR; the instructor put me through all the paces:  stalls, steep bank turns, slow flight, spin entries (we had no parachutes so spins would have been “illegal”) and numerous landings at a relatively short runway.  By the end of the BFR, I was soaked from sweat, but on my solo return flight to KRBL, I felt fabulous, and for the first time was oblivious to bumps:  I was flying the plane.  Another turning point came when I was laid up with Shingles:  my main pastime was watching videos which featured aerobatic flying and all the while I said to myself, “I can do that”.  As soon as the Shingles abated I headed straight to the airport and pushed and pulled the Pitts through a series of maneuvers (none of which would have scored any points in an actual competition) and, again, after the flight, I was elated.  And finally there was the stern resolution that I made reminding myself that I was flying for the fun of it, and wouldn’t let anything else get in the way of that enjoyment.  Gradually, the fear abated and the enjoyment and the utility of the plane increased many times over.

Now the Pitts is anything but a cross country traveler, but that is how I used it.  I set a goal to visit all of the airports that looked like they had a decent restaurant where I could go for lunch.  So that took me all over northern and central California and into Nevada; later, after my family and I moved to the central coast, I covered many parts of southern California as well.  Occasionally I would roll or loop the plane and I was fascinated with inverted flight (trying to navigate off the GPS while inverted is a real hoot) but if it diverted from getting from point A to point B, I avoided it. 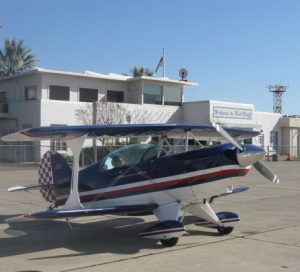 I never flew 24 MC anywhere the limit of it’s capabilities; it was a fun plane to fly; I enjoyed it.  But occasionally, and more frequently after five years, I wanted something that would fly a little faster and go a little further.  So, after five years and almost 400 hours on the tach, once again I was turning the pages of Trade-A-Plane, but not too certain what I was trying to find.