So now I was the proud owner of a fabric covered plane with a ginormous hole in the fabric and I didn’t have a clue as to where to start.  Well, actually I did know where to start:  the insurance company.  After just a couple of phone calls an insurance adjuster was scheduled and would arrive in a matter of just days.  Fortunately my paperwork was all in order.  Then, there was my local A&P–Al at Air San Luis. 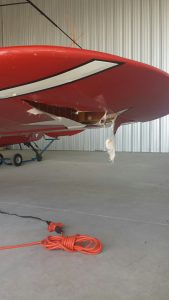 Al was a Godsend; without him, I would have been lost.  Without belaboring all of the details, we decided that Al would put a temporary patch on the hole, obtain a ferry permit and I would take the plane to Ray’s Aviation in Santa Paula for a permanent patch for the wing.  Actually, “we” didn’t decide anything; Al pretty much told me what needed to be done and that was the way it was going to be.

As far as “plans” go the one described above seemed straightforward and I was encouraged and just assumed that the repairs would be started quickly and would be complete in short order.  The plan started on schedule but went south quickly.  The first thought was just to use duct tape to make the patch.  But the hole was so big that the weight of the duct tape pulled the patch from the bottom of the wing–there wasn’t enough clearance behind the aileron to go completely around the wing with the tape.  Plan B involved sanding down the paint ant applying a fabric patch; this too should have been a quick fix but for the fact that the weather turned unseasonably cool and the bonding goop that Al wanted to use required warmer weather.  So we waited.  Eventually the weather warmed and now, nearly two months after the unfortunate occurrence in Reedley, the plane was taken down and handed off to Ray.

But Ray was in high demand; remember this is now in June.  Ray’s Aviation does a LOT of work for guys with aerobatic planes and once again I had to wait until Ray had the chance to start on the project.  At this point the project had expanded to a complete recovering of the bottom wing which the insurance company would pay for.  The only thing that I would be paying for would be modifications to the lower wing attach points to remove an AD.  But just as the work began another landmine exploded:  Ray indicated that the fabric on the whole plane was shot; it didn’t need a punch test, the fabric could be torn like tissue paper with your bare hands.  I knew this day was coming–the plane still sported the original cotton fabric that it wore the day it left the factory–but I was not ready for it mentally.  Holy crap.

All hope for seeing the plane back in short order and at little or no cost was shattered.  I had no idea how long this was going to take or how much it was going to cost.  But once again, the parts were ordered and the work began.  Ray was great about keeping in touch and letting me know about his progress:  he called me on a regular basis to tell me about some new part or some new repair that was required that wasn’t in the original quote.  And each time when asked about the cost of the additional work, Ray’s response was “Oh, I don’t know, but it will be around $X,XXX.XX.

I began to get concerned about all of those “XXXXs” adding up.  But we soldiered along and eventually, very late in 2015, the work was finished; and, it 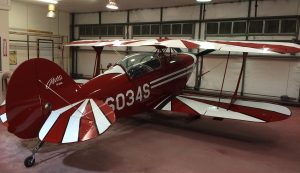 was beautiful.  And in all fairness to Ray all of my concerns about the cost were unjustified.  Sure, it wasn’t cheap, but it wasn’t outrageous by a long shot; I felt that he did a great job at a fair price.  I couldn’t have been more pleased.  I even got a souvenir.