Alas.  Time flies.  And you know what they say about the best laid plans.  I started this post over two years ago and then…..life happened.  And even though things have once again taken a MAJOR change, I decided to go ahead and finish this post before trying to catch up to the present.  Had I have pursued this post and completed it when I first started, it surely would have been more lengthy as the events would have been clearer in my mind.  But I will soldier on and give it my best shot. 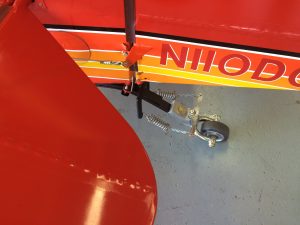 The Sunbird Saga:  From Beginning To End

I am a Virgo and have been told that Virgos tend to analyze things to death.  While I generally don’t believe in all of that astrological hoopla, I DO tend to seek out gobs of data when moving into something new.  My gut told me that even though the Sunbird was a “Pitts”, it somehow was substantially different than anything that I had flown and I needed to find out exactly what those differences were all about.  Only one man alive had flown the Sunbird and that was Spencer Suderman. Spencer had overseen and bankrolled the restoration of the Sunbird in anticipation  of using it to set a new world’s record for inverted spins.  Spencer’s help was priceless; we spoke by phone; we exchanged emails; we covered everything from start-up to shut down; and to me I saw LOTS of subtle differences between the Sunbird and anything else that I had flown.  But I had everything covered; at least that is what I thought:  rudder pedals, equipment, fuel transfer…..everything…..or so I thought.

After amassing pages of notes from my conversations with Spencer and pouring over all of the manuals for the avionics installed, I headed off to New Mexico to meet Fara Green, a delightful lady and the widow of the Sunbird’s builder, Dick Green, and to pick up the Sunbird.  The first order of business was to jump in the plane and see first hand all of the things that Spencer and I had discussed in such great detail.  Everything was exactly where it was supposed to be and worked as expected; there was nothing to do except fire it up and see how it handled.  So off I went; I fired it up and taxied out of Fara’s hangar attached to her home.  And that is when I ran into, almost literally, my first problem: the damn thing wouldn’t turn.  No matter what I did, no matter how far I pushed on the rudder pedals, the plane would simply not turn.  I ran off of the taxi way at least twice and almost ran into a post before I got on the phone with Spencer.  It seems that we forgot to discuss the tail wheel which was a free castering device that can only be steered, and just barely, by differential braking.  It took a fair amount of practice for the rest of a very hot afternoon.  And when it is 105 degrees in New Mexico, it is hotter than hell inside a single place biplane with no air vents and a bubble canopy.

The hospitality extended by Fara was unbelievable but the time came to leave; I was heading into what proved to be the hottest week of the year throughout the southwest.  Morning came, the take off was routine and I was on my way.  Now I had several concerns but on the top of my list was fuel:  the Sunbird doesn’t hold very much.  So, my first leg was relatively short so I could top off the fuel.  Ultimately it would take six fuel stops to make it home.  My next concern was landing:  despite Spencer’s reassurance, I wanted to see just how this thing handled  from power back to shut down.  That first landing was a non event.  Thanks Spencer.  But the trip back to San Luis Obispo had other obstacles:  I was sick and it was hot.  I don’t recall what medication I was taking but I am sure that the FAA may have raised an eyebrow or two.  And the heat was unbearable.  My plan was to fly only in the morning to avoid the hottest part of the day but on the second day it was already 115 degrees when I landed in Palm Springs and it wasn’t yet noon; that day topped out at 124 degrees. But make it home I did and without breaking or bending a thing, including my ego.  In fact, I was pretty jazzed about it for several days.

Over the next several months I accomplished a lot, including getting rid of that ridiculous tailwheel.  A trip back to Ray’s Aviation resulted in adding a big 3 bladed MT prop and a steerable tailwheel.  Then there was a fair amount of time in the pattern learning how to cope with the incredible sink rate with the extra weight and braking effect of that large prop, but I eventually got there.  Over time, I traveled with the Sunbird throughout California and into Nevada and Arizona.  Given the fuel situation–that is, the lack of a reasonable amount of fuel–I normally flew with the power pulled back.  But because the plane was so light and the engine and prop so powerful, I still could cruise at 150 MPH when the engine was using slightly less that 11 gallons per hour.

The Sunbird was built to fly, not to be worked on by a mechanic.  It seemed like even some of the simplest things if done in a certified Pitts proved to be a challenge on the Sunbird.  Thank God I had access to Ray; it would have been impossible without him.  The engine compartment was especially challenging: there was virtually no access to 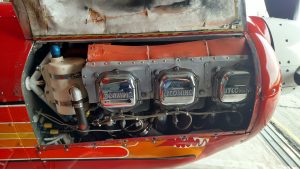 many of the areas on the accessory case.  If the day ever comes when the electronic ignition goes out, the engine will have to be pulled.

One hot Saturday in July, 2017, found me topping off the tanks in Thermal, California, after a 10 – 15 minute flight from my home base at Palm Springs. (I like being based in Palm springs where KPSP is only a mile and a half from my house.  But at $7 a gallon for 100LL, I usually fueled up elsewhere until I learned that the FBO at PSP was supposed to be giving me a sizable credit for being a tenant. Once we got that credit situation straightened out, things got more friendly.)  While taxiing away with my now full fuel tanks, the radio came alive with this simple message from a stranger: “Hey Pitts, you’re leaking oil like a sieve”.  Even though I managed to kill the

engine in record time, I had already lost all but about 2 to 3 quarts of oil.  It took over a month of down time, two oil lines and an oil cooler to get the Sunbird back in the air.  Once flying, I headed straight to Santa Paula and once again Ray was able to fix the cause of the problem and not just patch up the symptoms.  So now the oil cooler had been repaired yet again and the engine sported a new and smaller starter and relocated starter solenoid; that finally put an end to the oil issues.

Even though the fuel situation could be managed to allow for travel from Point A to Point B, travel was tenuous at best: it was hot and it was small and much to my surprise, I really missed the 2nd seat.  So, once again, I started thinking of selling.  But this time, when I eventually listed the plane, I discovered that the sale would be anything but easy.  In fact, it was a bitch and a real pain in the ass.  I am not saying that all of the prospective purchasers were scavengers; they weren’t.  One really fun guy from southern California really loved it and didn’t balk at the asking price (at that point I was still asking only about 85% of what I had paid into purchasing it, not including repairs); but he was sooooo big that he could barely move once he wedged himself inside.  Life sometimes can be cruel.  But sell it did and I moved on.

And I came down with mono.